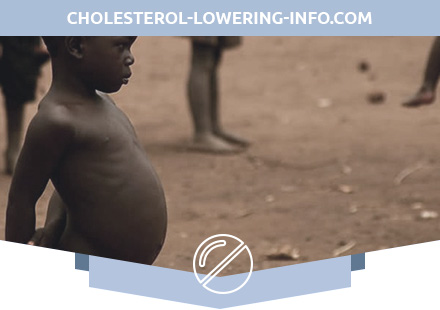 Kwashiorkor is a type of severe dystrophy. The disease usually occurs in children 1-4 years old, although it happens that it occurs at an older age (for example, in adults or in older children). A pediatrician from Jamaica, Cicely D. Williams, first described this condition in the 1935 medical journal Lancet. When a baby is breast-fed, it receives certain amino acids necessary for growth from breast milk. When a baby is weaned, in the case when products replacing mother’s milk contain a lot of starches and sugars and few proteins (as is usually the case in countries where the main diet of people consists of starchy vegetables, or where mass starvation began), the child may start kwashiorkor.

This name comes from one of the languages ​​of the coast of Ghana, and literally means “first-second”, and means “rejected”, reflecting that the condition begins in the oldest child after weaning, often due to the fact that another was born in the family child.

One of the symptoms is bloating of children’s stomachs (ascites), which often occurs in children in poor areas of Africa, because cassava tubers contain only a small amount of protein (1.2%) and very few essential amino acids. With cassava-based nutrition, these factors lead to infant pellagra (kwashiorkor). Due to the lack of important amino acids, internal organs accumulate water. In this regard, the use of cassava leaves, containing a large amount of protein, as a vegetable is also recommended.

There are various explanations for the development of kwashiorkor, and the topic remains controversial. It is now recognized that the presence of protein deficiency, combined with energy and micronutrient deficiency, is certainly an important factor, but this alone cannot be a key factor. The disease is most likely due to a deficiency in one of several types of nutrients (for example, iron, folic acid, iodine, selenium, vitamin C), especially those that are necessary for the production of protective antioxidants. Important antioxidants in the body that may be missed in children with kwashiorkor may include glutathione, albumin, vitamin E, and polyunsaturated fatty acids. Therefore, if a child with limited ability to receive one or another type of nutrient or antioxidant is stressed (for example, HIV infection or poisoning with toxins), he is more likely to have kwashiorkor.

Protein deficiency, often combined with a lack of energy, vitamins and trace elements, leads to impaired development of the child, degenerative changes in organs and tissues. The leading factor in the pathogenesis of kwashiorkor is the lack of plastic substances and enzymes in the child’s body. Kwashiorkor is especially easy to develop in young children, as to ensure intensive processes of growth and development, it is necessary to maintain a constant positive nitrogen balance in the body (protein intake should exceed their expenditure).

The earliest symptoms of kwashiorkor are nonspecific: lethargy, apathy, or irritability. Subsequently, growth retardation, muscle hypotension and their dystrophy, and a decrease in tissue turgor are observed. Edema appears early (initially hidden, then explicit), which masks the drop in body weight. Skin changes are characteristic – hyperpigmentation and layered peeling in places of greatest friction on clothing, depigmentation at the site of previous darkening or after desquamation, sometimes generalized depigmentation. Hair becomes thin, thin, lose elasticity. Due to depigmentation, dark hair can turn red with streaks, red-orange or gray. Anorexia, vomiting, and diarrhea are often noted. As a rule, the liver increases (due to fatty infiltration). Signs of deficiency of vitamins A, group B may appear. Immunity sharply decreases, and therefore infectious diseases that take a severe course often join; Often there are complications caused by a secondary infection. The function of the c.n.s. up to the development in severe cases of stupor and coma with a fatal outcome.

The diagnosis is based on anamnesis (e.g., early weaning, quantitative or qualitative malnutrition), clinical symptoms (stunted growth, swelling, changes in muscles, skin, hair) and laboratory examination results. The most characteristic symptom is hypoalbuminemia. In addition, the blood glucose is reduced (while a glucose tolerance test reveals a diabetic type of sugar curve), potassium, magnesium, cholesterol, enzyme activity, hemoglobin concentration. Despite growth retardation, secretion of growth hormone of the pituitary gland is increased. At the beginning of the disease, ketonuria can be observed.

The treatment of kwashiorkor is carried out in a hospital. Correction of nutrition is necessary in accordance with the age needs of the child. The missing amount of protein is compensated due to the introduction of milk, cottage cheese, protein entities, amino acid preparations into the diet. The protein content and energy value of the diet increase gradually. Vegetable fats are preferable, because they are better absorbed than animals.

From the first days of treatment, preparations of vitamins (especially A and group B), potassium, magnesium, iron (for anemia), as well as enzyme preparations, are prescribed. With complications caused by a secondary infection, antibacterial agents are indicated. They treat diseases that contribute to or cause the development of kwashiorkor. After the start of treatment, body weight may decrease over several weeks due to a decrease in edema.

The prognosis for early diagnosis and timely treatment is favorable.

Prevention of kwashiorkor consists mainly in the rational nutrition of young children (natural feeding in the first year of life, timely and correct introduction of complementary foods, a sufficient amount of dairy products in the diet). Timely and adequate treatment of diseases leading to protein deficiency is important.